Prolific in the field. Champions in the malthouse. A joy on the palate. LCS malting barley varieties are the building blocks for exceptional beers and spirits.

Farmers, get your seed

Maltsters, find your sourceBrewers and distillers, work with the best

Great beer and spirits start with great barley. LCS is dedicated to developing new, improved malting barley seed bred expressly for the growing conditions of local farmers and the desired characteristics of local maltsters, brewers and distillers. Our quality-assured, two-row barley varieties are perfectly suited for all-malt styles of beer and spirits.

Get ready for the next wave

Coming to fields and pint glasses near you

Meeting the demand for a growing industry

The explosion of craft beer in the United States has created a new kind of demand on raw material producers and the supply chains in which they operate. Until recently, the most basic raw material used in all North American brewing operations, barley, was essentially the same for all parties at the table. The American Malting Barley Association (AMBA), the Brewers Association (BA) and the North American Craft Maltsters Guild (CMG) are actively investing resources to help identify barley varieties that excel in all-malt styles of beer.

With exceptional yield in the field backed by high extract in the malthouse, malts sourced with LCS malting barley seed are an excellent choice for brewers and distillers alike. 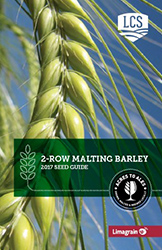